I got the horse bug at an early age, spending my every spare minute at Whitakers Riding Stables. I learnt a lot there; Enid Whitaker has to be admired – she ran a riding school/ livery stables, raised 4 boys into showjumping, drove to shows etc. My favourite horse was Brother Scott, ridden by Michael Whitaker, Scotty’s memory lives on in Kettlesnout Brother Scott, a little character who is a favourite when owner Catherine takes him showing. My journey into shetlands began when we bought our first ponies, Dilston Golden Sundaymouse & Dilston Foxglove (pictured above centre)  from from Sue & Peter Jackson. Their stud was based largely on South Park bloodlines. We remain for grateful for all their support over the years. 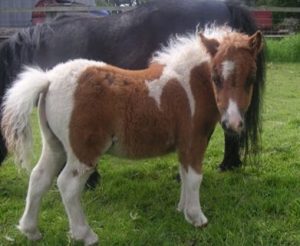 It wasn’t an easy start, however, Sunny was in foal when she came and we eagerly awaited her baby. She was a joy to own and sailed through pregnancy but then had a long, difficult foaling with 2 vets in attendance. Her beautiful colt, Star, was tragically stillborn. Sunny was sedated so was less aware of her loss. We were devastated. Afterwards, Sue Jackson generously said would we like one of their foals. We hesitated at first as it couldn’t replace Star but then took up Sue’s kind offer which gave us a focus. We chose Dilston Piper, a fantastic foal who subsequently became our first stallion. Piper is pictured as a foal left. 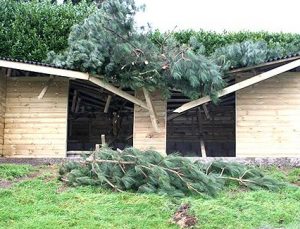 The following year, Merriville Stud kindly loaned us a stallion, Redcedar Firefly Bobby.  We built a new stable over winter, in good time for Foxy’s foal due from 19th March. The day after I finished nailing on the roof, in terrible winds, disaster struck again when the new building was destroyed when a neighbour’s tree blew over in a storm (right) luckily no ponies were inside. I despaired after all our toiling!  We then had to quickly work on repairs so Foxy could go in overnight as planned from the end of February, over 2 weeks before her due date.

However, at the end of February I was shocked to find a tiny, wet, cold foal in the field (seen below right) with North Wells Scotch Rose who had been blood tested not in foal. We brought them both in and our vet came and said she needed to inject Rosie to promote milk production; it didn’t come, something wasn’t right. Then Foxy, who had been in the field next to Rosie was seen running milk and looked a different shape – it dawned on us this might not be Rosie’s foal. 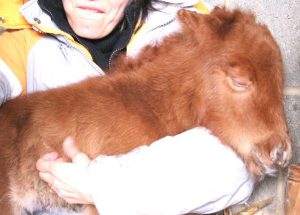 To cut a long story short, it transpired the foal was Foxy’s. She must have foaled prematurely next to the post and rail fence and pushed her foal out under the bottom rail into the next field where Rosie adopted her After a hefty vet bill (2 plasma infusions) and 2 weeks on our ICU, it was a happy ending for Cinderella, our filly as seen with Foxy below. She became our best friend so we had to keep her. If things hadn’t worked out with Cindy I doubt I would have continued breeding. Needless to say our fencing was modified!! 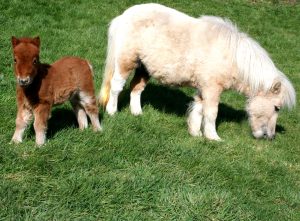 Despite these setbacks, we’ve happily gone on to have many wonderful foals and been there fat foaling. We aim is to breed well mannered, friendly ponies. Over the years, our foals have found lovely homes  – from down to the road to sales to Finland, Austria etc. Ponies have sold for many purposes; breeding, companions, being shown (Little Scotty has won lots!) We have a policy of honest selling to help ensure long term, loving homes. See our for sale page for ponies available. Foals usually available and possibly mares. If we don’t have what you’re looking for, we have excellent friends/contacts who may have. See our pony care page if you’re thinking of buying a shetland pony.

Overall, my experience has taught me to take nothing for granted – don’t assume that the mare the foal is with is it’s mother! Now we use everything, such as milk test and CCTV, to help keep foals safe. There’s always going to be the unexpected but we always marvel at a new foal being born.  Sadly Sunny has never had a foal since losing her first but she’s still best friends with Foxy and is a super auntie! We love her to bits!